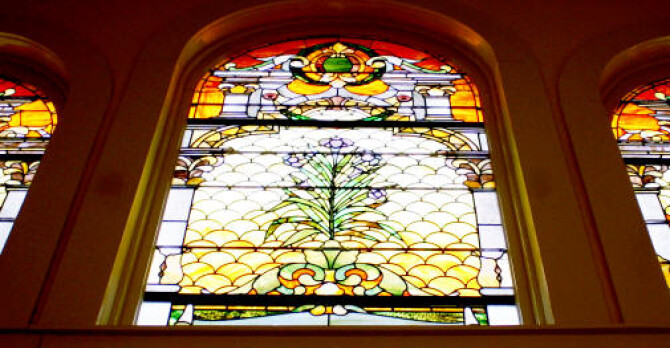 BRIEF HISTORY: “At a meeting of a number of Baptists at the house of Simon Beckham in the town of Frankfort to consult on the propriety of establishing a church in this place Brother S. M. Noel was requested to act as moderator and j. Dudley as clerk. The objects of the being having been stated by Brother Noel, the following resolutions were adopted: (nem con) “Resolved that it is expedient to proceed without delay in suitable arrangements preparatory to the constitution of a Baptist Church at Frankfort…Resolved that we now adjourn to meet again at this place on the 28th inst.”

Thus did the First Baptist Church of Frankfort have its launching. It was organized on February, 25, 1816, with thirteen members. Rev. Silas Noel (grandfather of Mrs. John W. Gaines) preached the first sermon for his text, Acts 11:26. At first it met in members’ houses, but then started meeting in the House of Public Worship which stood in the old State House yard on the corner of Lewis and Broadway. The House of Public Worship was open to all churches and the Baptists used it on the fourth Saturday of each month.

The first regular pastor of the church was Rev. Henry Toler, and the honor roll of those leaders who served the church so faithfully and triumphantly has included: Jacob Creath, Philip S. Fall, Silas M. Noel, and Porter Clay (brother of Henry Clay).

In 1827 Frankfort’s First Baptist Church building was built on Lewis Street near Gaines’ Plumbing Shop and English Refrigeration Co. It is noted that in Paul Sawyier’s print, “Rainy Day in Frankfort,” a church building behind the store…now known as “Nitro”) was presumably this early church structure. In 1867 the church burned and the outcome was the present church sanctuary built on the St. Clair street location in 1868. According to the minutes, a contract was let to A.G. Brawner for the stone work at $3.75 per perch and $12.25 per thousand brick laid in the wall. In 1904 the present front was put on the church.

In 1928 the Rev. Chesterfield Turner, Pastor, led the church in the construction of a fifty room Sunday School addition which cost $84,000.

In 1957, a four-story educational building was built. It currently houses the Clothes Closet on the fourth floor, numerous Bible Study classrooms, and the church’s Singing Bridge Academy, a Christian Pre-School program for three and four year olds.

In 2000, First Baptist Church went through the process of “separating itself” from the Southern Baptist Convention as a result of doctrinal differences that exhibited prejudices against women serving in church leadership positions and other criteria for interpreting the Bible which did not conform with traditional Baptist principles of the 1963 Baptist Faith and Message statement. The church voted to affiliate with the Cooperative Baptist Fellowship. To date, the FBC remains associated with the Kentucky Baptist Convention and the Kentucky Baptist Fellowship. It is not a member of the Franklin Baptist Association, again having removed itself from affiliation, as a result of the association not following its own constitution and by-laws in removing a sister church from fellowship.

In 2001, the concept of Mission Frankfort was launched and a comprehensive   global missions program described as “Reaching our community and the world   with the Gospel of Jesus Christ.” The Mission Frankfort Clinic was founded   in 2002, and a motel facility was purchased in 2005 in Owsley County,   Kentucky, to house mission groups. In 2008, more than 26 church groups   utilized the facility, called the “Emma Quire Mission Center,” in honor of   one of FBC’s longtime servant members, to provide Christian social   ministry to persons in the second poorest county in the United States.

THE FUTURE OF FIRST BAPTIST is best described by a note in a Dedication of the 1928 educational building held on May 17-20, 1940 at the conclusion of payments associated with its indebtedness: “We drink from wells we did not dig; we eat from vines we did not plant.” Our heritage challenges all of us to heroic living, sacrificial giving and absolute unconditional surrender to our Lord Jesus Christ. By the grace of God we in this generation will count it a high privilege to build upon a foundation that has been sealed with the glowing testimony of those who have gone before!